1. The coefficient of correlation ranges between

2. Total expenditure on a commodity rises, when its price. Demanded for the commodity will be:

(b) More than unit elastic.

5. By deducting intermediate consumption expenditure and net indirect taxes from value of output , we set:

6. The expenditure in goods and services purchased for resale by production unit is:

(b) value of final product.

7. Domestic income will be more than national income when net factor income from abroad is:

8. At equilibrium level of national income:

9.  Which one of the following is a measure to correct excess demand in the economy?

(a) Increase in rate of taxes.

(b) Buying of government securities by central bank from commercial banks.

11. Find the Spearman’s coefficient of correlation form the following data: 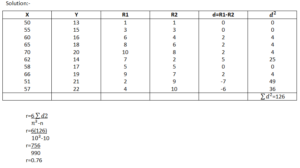 13. How is the price elasticity of demand of a commodity affected by availability of its close substitution? Explain.               3

Ans.:- Price elasticity of demand of a commodity affected by availability of its close substitution – Demand for a commodity with large number of substitutes will be more elastic. The reason is that even a small rise in its prices will induce the buyers to go for its substitutes. For example, a rise in the price of Pepsi encourages buyers to buy Coke and vice-versa.

Thus, availability of close substitutes makes the demand sensitive to change in the prices. On the other hand, commodities with few or no substitutes like wheat and salt have less price elasticity of demand.

14. How is the supply of a commodity affected by the change in price of other related goods? Explain. 3

Ans.:- If the price of above the equilibrium price, there will be excess supply for the product since the quantity supplied exceed quantity demanded, meaning producers are willing to sell more than consumers are willing to buy. This mismatch between demand and supply will cause the price to decrease. Firms will decrease the price they change for their limited demand and consumers will pay the lower price to get one of the many available. This happens till the market reaches equilibrium.

Ans.:- A transfer income is basically non-exhaustive meaning they actually do not contribute to any capacity building or capital formation. Rather these are governments spending on providing benefits to various vulnerable sections of the society i.e., subsidies, providing income to unemployed people, interest subvention etc.

19. How do the Commercial banks create credit? Explain with the help of a numerical example.     3

Ans.:- There are two ways in which a bank creates credit:-

1) By advancing loans on the cash credit bases or by an overdraft arrangement;

2) By purchasing securities and paying for them with its own cheques.

Let us see the actual process. Suppose a customer deposits Rs 1,000 in a bank. The bank has to pay him interest; therefore the bank must seek a safe and profitable investment for this amount. That is, it must lend it to somebody in order to earn interest. But this amount is not actually paid out to the borrowers; it is retained by the bank to meet its obligations, i.e./ to pay to those of its depositors who need cash, and draw cheques for the purpose.

Suppose the bank in which a depositor has deposited Rs. 1000 keeps 20 per cent-cash reserve to meet the demand of depositors. This means that, as soon as the bank has received a deposit of Rs. 1,000, it will make up its mind to advance loans up to the amount of Rs. 5,000 (only one-fifth reserve is kept). When, therefore, a businessman comes to the bank with a request for a loan of Rs. 5,000, he may be sure of being granted accommodation to this extent, provided, or course, his credit is good

Ans.:- The following are the differences between Revenue receipts and capital receipts in a government budget:-

Example of capital receipts:- a sale of fixed assets.

This problem has two dimensions:

a) Types of goods to be produced.

b) Quantity of goods to be produced.

Ans.:- Causes of operation of Law of Demand:-

a) Law of Diminishing Marginal Utility:- The operation of law of demand can be explained on the basis of the law of diminishing marginal utility. The law states that as more of a commodity is purchased, its marginal utility to the consumer will be less and less. Therefore the consumer while purchasing the commodity values less and less the additional units of the commodity. So he will purchase more only if price falls.

b) Income Effect:– When price of a good falls, real income of the consumer rises. If the consumer has $5. Then he can purchase 3 units of apple. If price falls to $3 then to purchase same 3 units, the consumer will spend $ 3×3 = $9. This leaves a surplus of $6 with the consumer. Thus a fall in price has the same effect of increase in money income and hence is known as the income effect of a price reduction.

Given, Price of a commodity rises by 20% and quantity supplied increases from 100 units to 125 units

3. Freedom of entry or exit:– Like in perfect competition, firms can enter and exit the market freely.

The marginal propensity to save and the marginal propensity to consume are both measurements relative to the amount of expendable income in the budget of individuals and businesses alike. The measurement is also relative to a population as a whole and measuring against a population set reveals important data about consumer spending and savings that is valuable for industry and government data.

27. The following data provide the information about weekly wages of 100 workers in a firm. Calculate arithmetic mean by using step deviation method.

Ans.:- Index number are the tools for measuring changes in the magnitude o a group of related variables over time with respect to vase year.

The following are the issues to be kept in mind in the construction of index numbers:-

1. Difficulties in the Selection of the Base Period.

2. Difficulties in the selection of Commodities.

3.  Difficulties in the Collection of Prices.

5. Difficulty of Selecting the Method of Averaging.

9. Comparisons of Different Places not Possible.

10. Not Applicable to an Individual.

Ans.:- Three properties of indifference curves are as follows:-

1) Indifference Curves are Downward Sloping:-  Virtually all indifference curves have a negative slope. That is, they slope downward from left to right. The slope of an indifference curve shows the rate of substitution between two goods, i.e. the rate at which an individual is willing to give up some quantity of good A to get more of good B. If we assume that the individual likes both goods, the quantity of good B has to increase as the quantity of good  A decreases, to keep the overall level of satisfaction the same. Because both axes each represent one of the two goods, this relationship results in a downward sloping curve.

2) Higher Indifference Curves Are Preferred to Lower Ones:– Consumers will always prefer a higher indifference curve to a lower one. This is due to the basic economic assumption that “more is always better”. Just think about it, if someone were to ask you if you wanted a free slice of pizza or an entire pizza for free, what would you say? Who says no to free pizza, right? Now, of course it’s not always that simple, but in basic economic theory we can assume that consumers have a preference for larger quantities.

Ans.:- Total Product: In simple terms, we can define Total Product as the total volume or amount of final output produced by a firm using given inputs in a given period of time.

Average Product: It is defined as the output per unit of factor inputs or the average of the total product per unit of input and can be calculated by dividing the Total Product by the inputs (variable factors).

Ans.:- According to the Bank of England, in modern economy, money is a type of IOU, but one that is special because everyone in the economy trusts that it will be accepted by other people in exchange for goods and services.

Functions of Money as:-

a) ‘Store of value’:- This can refer to any asset whole “value” can be used now or used in the future i.e. its value can be retrieved at a later date. This means that people can save now to fund spending at a later date.

b) Standard of deferred payment:– This refers to the expressing of the value of a debt i.e. if people borrow today, then they can pay back their loan in the future in a way that is acceptable to the person who made the loan.