1. Candidate must write his/her Roll Number on the first page of the question paper.

2. Please check the question pa per to verify that the total pages and total number of questions contained in the paper are the same as those printed on the top of the first page. Also check to see that the questions are in sequential
order.

3. Making any identification mark in the answer-book or writing roll number anywhere other than the specified places will lead to disqualification of the candidate.

5. (a) The question pa per is in English/Hindi medium only. However, if you wish, you can answer in any one of the languages listed below:

You are required to indicate the language you have chosen to answer in the box provided in the answer-book.

(b) If you choose to write the answer in the language other than Hindi and English, the responsibility for any errors/mistakes in understanding the question will be yours only.

(ii) All questions from Section ‘A’ are to be attempted.

(iii) Section ‘B’ has got more than one option. Candidates are required to attempt questions from one option only.

Ans.:- The following are the differences between gross investment and net investment:-

2) Not considered to be a better indicator in comparison to net investment.

1) It is estimated by subtracting capital depreciation from gross investment.

a) Utensils in a household kitchen

b) Sewing machine of a tailor

d) Milk used by a household

Ans.:- Economic Growth is an increase in the production of economic goods and services, compared from one period of time to another. It can be measured in nominal or real terms.

Ans.:- Statistical data consists of facts: In the plural sense, statistics refers to data, but data to be called statistics must consist of aggregate of certain facts. A single and isolated fact or figure like, 60 kgs. Weight of a student or the death of a particular person on a day does not amount to statistics.

Ans.:- The following are the differences between stock and flow:-

Ans.:- Intermediate goods are items that we use to create another products or the ingredients of finished goods. Suppliers of intermediate goods sell them to, for example, manufacturers for the inclusion in their final products.

Ans.:- “Products that can satisfy some of the same customer needs as each other. Tea and coffee are classic examples of substitute goods”.

Ans.:- Two main features of Indian economy as a developing economy are:-

11. Calculate the arithmetic mean by using ‘assumed mean’ method from the data given below:    5

Ans.:- Fiscal Deficit:- Fiscal deficit is by far the most important measure of a deficit budget  in any economy. Fiscal deficit is equal to the excess of total expenditure (capital and revenue ) over the sum of revenue and  capital receipts excluding borrowings.

Financing the Deficit, A deficit in government budget may be financed by the following ways:-

2) Borrowing:– Budget deficit can be financed by borrowing from domestic sources (e.g., public and commercial banks) and external sources (e.g., foreign government, World Bank and other international financial institutions). Borrowing from public to deal with deficit is considered better than deficit financing because it does not increase the money supply which is regarded as the main cause of rising prices.

3) Fiscal Discipline:– Government deficit can be reduced by an increase in taxes and reduction in public expenditure. In view of limited public revenue, more efforts should be made towards reduction in government expenditure which is referred to as fiscal discipline.

15. Explain the view that “economic planning in India has been a mixed bag of success and failure”. 5

17. Present the following data on the expenditure of a family in the form of a pie diagram :       8

(For Blind Candidates Only)

Note: Write the steps involved in the preparation of pie diagram for the above data. 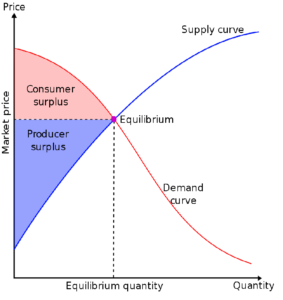 A detailed look at the above supply and demand schedule reveals a bag full of information about the market. Most importantly, we can observe that the demand and supply become equal at a price of 3. Thus 3 is the equilibrium price.

Ans.:- Credit Creation is a situation in which banks make more loans to consumers and businesses, with the result that the amount of money is circulation (being passed from one person to another) increases.

There are two ways in which a bank creates credit:-

1) By advancing loans on the cash credit bases or by an overdraft arrangement;

2) By purchasing securities and paying for them with its own cheques.

Let us see the actual process. Suppose a customer deposits Rs 1,000 in a bank. The bank has to pay him interest ; therefore the bank must seek a safe and profitable investment for this amount. That is, it must lend it to somebody in order to earn interest. But this amount is not actually paid out to the borrowers; it is retained by the bank to meet its obligations, i.e./ to pay to those of its depositors who need cash, and draw cheques for the purpose.

Suppose the bank in which a depositor has deposited Rs. 1000 keeps 20 per cent-cash reserve to meet the demand of depositors. This means that, as soon as the bank has received a deposit of Rs. 1,000, it will make up its mind to advance loans up to the amount of Rs. 5,000 (only one-fifth reserve is kept). When, therefore, a businessman comes to the bank with a request for a loan of Rs. 5,000, he may be sure of being granted accommodation to this extent, provided, or course, his credit is good.

20. What is fiscal policy? Explain any three fiscal measures undertaken by the government to control the poor fiscal situation in the country under the new economic policy.                  8

Ans.:- Fiscal Policy refers to the use of government spending and tax policies to influence economic conditions, including demand for goods and services, employment, inflation, and economic growth.

Three fiscal measures undertaken by the government to control the poor fiscal situation in the country under the new economic policy are:-

1) Development by effective Mobilization of Resources:- The principal objective of fiscal policy is to ensure rapid economic growth and development. This objective of economic growth and development can be achieved by Mobilization of Financial Resources. The central and state governments in India have used fiscal policy to mobilize resources. The financial resources can be mobilized by: –

a) Taxation:-  Through effective fiscal policies, the government aims to mobilize resources by way of direct taxes as well as indirect taxes because most important source of resource mobilization in India is taxation.

b) Public Savings:- The resources can be mobilized through public savings by reducing government expenditure and increasing surpluses of public sector enterprises.

c) Private savings:- Through effective fiscal measures such as tax benefits, the government can raise resources from private sector and households. Resources can be mobilized through government borrowings by ways of treasury bills, issuance of government bonds, etc., loans from domestic and foreign parties and by deficit financing.

2. Reduction in inequalities of Income and Wealth:- Fiscal policy aims at achieving equity or social justice by reducing income inequalities among different sections of the society. The direct taxes such as income tax are also more in the case of semi-luxury and luxury items which are mostly consumed by the upper middle class and the upper class. The government invests a significant proportion of its tax revenue in the implementation of Poverty Alleviation Programmes to improve the conditions of poor people in society.

3. Price Stability and Control of Inflation:-  One of main objectives of fiscal policy is to control inflation and stabilize price. Therefore, the government always aims to control the inflation by reducing fiscal deficits, introducing tax savings schemes, productive use of financial resources etc.

(Role of Agriculture and Industry in India’s Economic Development)

Ans.:- Two causes responsible for low productivity in agriculture in India are:-

a) Dependence on Monsoons

b) Condition of agricultural labourers.

Ans.:- Importance of Industries in Indian economy are:-

1. Rapid growth of income:- The first and the foremost argument in favor of industrialization is that it can provide a base for rapid growth of income. It is because of the fact that productivity rates are higher in industry than in agriculture. Industries mainly depend on man’s effort while agriculture is restricted by the limiting factor of the nature. It is also seen that the industrialized nations have a high per capita income.

4. Development of agriculture:- The requirements of agriculture are met by the industries in large. Agriculture requires improved farm machinery, chemical fertilizers and pesticides. It also requires storage and transport facilities. All these are adequately provided by our own industries.

5. Employment:- With the increasing population agriculture is unable to provide for employment. Hence it is very important to set up industries to absorb this surplus labor. Hence industries can solve the problem of unemployment.

Ans.:- Industries and agriculture are interdependent i.e., they depend upon each other.

Ans.:- The sex ratio is usually expressed as the number of males per 100 females. It may also be given as a percentage excess or deficit of males. The Gender ratio is a pretty important part of evolutionary life. Sex ratio calculation is used to describe the balance between the male and female population.

When number of males and females given

When female population % is given

When male population % is given

22. “Fast growth rate of population has adversely affected the well-being of masses.” Explain.     5

Ans.:- “Fast growth rate of population has adversely affected the well-being of masses”:- A welfare state line India is pledged to meet social needs of the people adequately and for this, the government has to spend a lot on providing basic facilities like education, housing and medical aid. But rapid increase in population make burden all the more heavy.

a) Environment and forests.

Ans.:- The high growth rate of population in India affect the following:-

b) Capital formation:– In underdeveloped countries, the composition of population is determined to increase capital formation. Due to higher birth rate and low expectation of life in these countries, the percentage of dependents is very high. Nearly 40 to 50 per cent of the population is in the non-productive age group which simply consumes and does not produce anything. In under developed countries, rapid growth of population diminishes the availability of capital per head which reduces the productivity of its labour force. Their income, as a consequence, is reduced and their capacity to save is diminished which, in turn, adversely affects capital formation.