1. The sum of deviations of the individual data elements from their mean is

(A) always greater than zero.

(B) always less than zero.

(C) sometimes greater than and sometimes less than zero depending on the data elements.

2. Price of a commodity falls from R15 per unit to R10 per unit but there is no change in its quantity demanded. Its demand is

3. Which one of the following factors is variable in the law of supply relating to a commodity?

(A) Prices of inputs used in production of the commodity.

(B) Prices of other goods.

(C) Price of the commodity.

4. What is the price elasticity of supply if the straight line supply curve cuts price axis (Y-axis) at a point above the point of origin?

(A) Less than unit elastic.

(B) More than unit elastic.

5. Which one of the following is related to the flow concept?

6. Which one of the following is a final good?

(A) A machine purchased by a wholesaler.

(B) Electricity used in a factory.

(C) Wheat purchased by a retailer.

(D) Machine purchased for use in a factory.

(A) Value of output – Intermediate consumption.

(B) Value of output + Intermediate consumption.

8. Value of investment multiplier is

9. Which one of the following is not an instrument of fiscal policy?

10. Find out the break-even point in the schedule given below:

Ans.:- Positive economics uses objective analysis in the study of economics. Most economists look at what has happened and what is currently happening in a given economy to form their basis of predictions for the future. This process of investigation is positive economics.

Examples, The law of demand – “if other factors remain constant, if price rises, demand declines; and if price decreases, demand inclines.”

Income isn’t equal in all Countries.

14. How is the supply of a commodity affected by increase in price of other goods? Explain.       3

Ans.:- Real flow is the exchange of goods and services between household and firms whereas money flow is the monetary exchange between two sectors.

Ans.:- Marginal Propensity to Consume (MPC), is an economic calculation that measures the amount of additional income consumers are willing to spend on goods and services rather than saving it.

Four factors that determine the marginal propensity to consume in an economy are:-

4) Rate of interest:- A significant rise in interest rate will induce people to consume less and save more in order to gain from the higher rate interest.

Ans.:- Government receipts which neither create liabilities nor reduce assets are called revenue receipts. These are proceeds of taxes, interest and dividend on government investment, cess and other receipts for services rendered by the government. E.g. Tax Revenue and Nontax revenue.

20. The following hypothetical data relate to the government budget:

Calculate the (a) revenue deficit, (b) fiscal deficit, and (c) primary deficit.

23. Describe the effect of increase in prices of related goods on the demand of a commodity.       4

Ans.:- The rise in the price of related goods is directly related to the other factors affecting demand.

Related goods are also known as substitute goods or complements.

Ans.:- (a) Excess demand:- In this situation, excess supply has exerted downward pressure on the price of the product. A market Shortage occurs when there is excess demand- that is quantity demanded is greater than quantity supplied. The increase in price will be too much for some consumers and they will no longer demand the product.

Ans.:- (a) Bank rate:- A bank rate is the interest rate at which a nation’s central bank lends money to domestic banks, often in the form of very short-term loans. Managing the bank rate is a method by which central banks affect economic activity.

Ans.:- Index numbers are the statistical tools which measure changes in the magnitude of a variable (like price, quantity of output, sales, export etc.) with respect to chosen base year. They measure average change in a group of related variables over two different situations.

The following are the uses of index numbers :-

2) Helpful to Policy Makers:– Index numbers are very useful for the policy makers. For example, the employers depend upon cost of living index for deciding the increase in the dearness allowance of their employees. Similarly, they play the role of a useful guide in policy formulation towards inflation, unemployment, agriculture, industrial production etc. Index numbers serve as a useful guide to the business community in planning their decisions.

3) To Simplify the Facts:– There are certain changes whose measurement is not possible without index numbers. They make possible the measurement of relative changes of a group of related variables.

4) They Reveal General Trends:– Index numbers help us to study the general trend of a phenomenon so as to draw important conclusions. 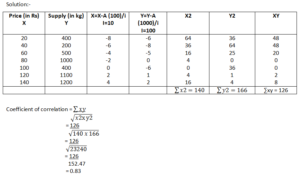 (a) Convex to origin.

(b) Slopes downwards from left to right.

Ans.:- (a) Convex to origin:- Indifference curves are convex to the origin because the marginal utility of each product consumed decreases with subsequent consumption. This convex relationship is based upon an idea dubbed the marginal rate of substitution, which is represented by the formula  (Z = change in X/ change in Y).

(b) Slopes downwards from left to right:- This is an important feature of Indifference Curve. If the total satisfaction is to remain the same, the consumer must part with a diminishing number of bananas as he gets as increasing stock of oranges. The loss of satisfaction to the downward movement must be made up by the gain through the rightward movement. As such the Indifference Curve must slope downwards to the right.

Ans.:- “The law of variable proportion states that if the inputs of one resource is increased by equal increment per unit of time while the inputs of other resources are held constant, total output will increase, but beyond some point the resulting output increases will become smaller and smaller”. 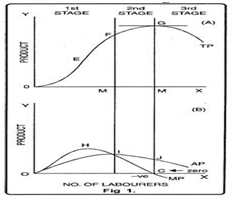 Three stages of the law:

3. Third stage:- This stage begins beyond point ‘G’. Here total product starts diminishing. Average product also declines. Marginal product turns negative. Law of diminishing returns firmly manifests itself. In this stage, no firm will produce anything. This happens because marginal product of the labour becomes negative. The employer will suffer losses by employing more units of labourers. However, of the three stages, a firm will like to produce up to any given point in the second stage only.

What is production function? State and explain the law of variable proportions in the context of total product and marginal product.                  6

Ans.:- In economics, a production function gives the technological relation between quantities of physical inputs and quantities of output of goods.

Second part see the above answer

(a) Medium of exchange.

(b) Measure of value.

Ans.:- (a) Medium of exchange:- Money’s most important function is as a medium of exchange to facilitate transactions. Without money, all transactions would have to be conducted by barter, which involves direct exchange of one god or service for another. The difficulty with a barter system is that in order to obtain a particular good or service from a supplier, one has to possess a good or service of equal value, which the suppler also desires. In other words, in a barter system, exchange can take place only if there is a double coincidence of wants between two transacting parties. The likelihood of a double coincidence of wants, however, is small and makes the exchange of goods and services rather difficult. Money effectively eliminates the double coincidence of wants problem by serving as a medium of exchange that is accepted in all transactions, by all parties, regardless of whether they desire each others’ goods and services.

(b) Measure of value:- Money acts as a unit of account or money is the measure of exchange value. This means that money is a sort of common denominator, through which the exchange value of all goods and services can be expressed without any difficulty. Innumerable exchange rates under the barter system earlier caused enormous trouble in the transactions of all kinds.